Yoga for The Rest of Us

The BMI was invented by a Belgian scientist around 1830 in a pseudoscience he called, “social physics” to determine the ratio of the measurement of the human body. Because if it’s a good enough measurement tool for planets, why not use it on humans? WTF?!

It was widely adopted in practice in 1972 without any modification or efficacy study despite being considered “inappropriate for individual evaluation.” And then, in a fuckwad move the NIH and CDC LOWERED overweight cut-off guidelines in 1998 effectively redefining almost 29 million people considered previously healthy as overweight. Bastards.

So now, a 150-year-old pseudoscientific measurement never studied for validity has been adopted by the NIH, the CDC, and the WHO as the standard to tell us we’re morbidly fat. Bitches, I KNOW I’m 20 pounds overweight. I don’t need YOU to tell me I’m fat.

I’m recovering from mild pneumonia. Yes, yes, life wisdom number 1743. When you’re sick, rest. I don’t recommend working out 14 hours a week. It can bite you in the ass. When you’ve been ill for over a month, go see your doctor.

That said, if you haven’t been to your internist recently, they now print out a packet with all of your patient instructions, medication updates, follow-up recommendations, and on the front page in big, bold print, yep, you guessed it . . . your BMI.

I’ve never been a fan of the BMI, but when I’m down with pneumonia looking at two to three weeks of bed rest and my BMI is wiggling its ass in front of my face I get a little irritated. Okay, a lot fucking angry.

According to my fucking BMI, I’m MORBIDLY OBESE.

I teach 12-13 hours of fitness per week. A combo of indoor cycling, yoga, circuit, and pilates. My average caloric burn runs around 7300 calories per week. When I don’t have pneumonia, I also rotate three dogs through an hour walk, one per day. I’m not including cleaning the house, yard work, moving rock, rebuilding a creek, or any other extraneous activity.

Sure, I do my share of Netflix and chill. We’re being a sold of defective goods. I’m not advocating downing fast food every meal, but a lot of us are on the crazy healthy side no matter what the scale says.

We’re a primarily Paleo-ish household. Have been for almost ten years. I gave up processed sugar, processed foods, most starchy, and wheat-based carbohydrates a long time ago. I don’t look at calories eaten or burned. 7300 calories per week people. I couldn’t eat that much if I tried. For ten years this lifestyle helped me maintain my ideal 160 lbs.

I’ve never been a tiny woman. If I decided to lift heavier weights, I’d probably look like Helga the Shot Putter.  I generally don’t lift more than 10-pound dumbbells, and I rarely bench press. It’s hard enough to find shirts that fit my linebacker shoulders and bulky arms. Not even going to discuss my 40D issues.

Though a breast reduction is becoming more and more tantalizing. Oh to be a snug little B-cup!

Cycling radically changed the shape of my lower body. I’m packing some serious J-Lo booty. It means even if I lose those friggin’ 20 pounds, I’m likely sticking to my fat size. I don’t mind.

I do fucking mind the application of an overgeneralized, almost 200-year-old equation without broader considerations of fitness, activity, body type, and well, more valid science. 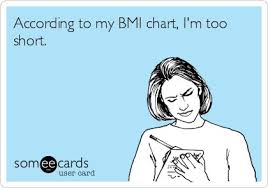 Don’t put that bullshit in big bold print on my medical file.

It’s the same sort of gobbledygook I fight on the hippy nazi end of the spectrum. Add this to the list: detoxing (more on that later), rinsing your organs, or yoga can’t hurt you. The BMI is a useful tool. BULLSHIT. By itself, it’s hokum.

And don’t fucking tell me I should probably be adding at least an hour of physical activity to my everyday schedule to address my obesity. Assholes.

As my wonderful Son 2 said, “It’s a way for the healthcare industry to scam people into taking more medication, charge higher insurance premiums, and prop up a defunct healthcare system based on profit rather than benefit.”

Damn, I raised a smart kid.

The BMI is rubbish. The medical industry should be using a method that doesn’t reek of snake oil. And it certainly shouldn’t be shoving it down our gobs as medical advice.

Okay, I can ignore the BMI. I’m cool with embracing my body and knowing I’m fit, strong, and mostly sane. I may still obsess over that friggin readout on the scale, but you won’t have to cut me out of the house any time soon.

What's In A Yoga Mat?

For Those Who'd Like The Flexibility To Reach To Scratch

I’m This Many Years Old

Say Do You Remember, Ba Dee Ya Dancing in September?